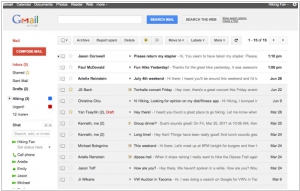 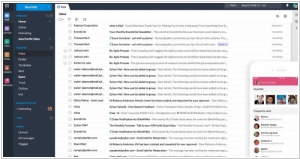 Zoho Mail is an email hosting service built with the needs of a modern business in mind. It provides best-in-class features exceeding even those of desktop emailing software for business users to communicate effectively while catering to the fine-grained customization and mailbox management needs of IT administrators. Additionally the seamless contextual integration with 20+ other Zoho applications provides higher productivity & collaboration.
GMail vs Zoho Mail in our news:
2020. Zoho Mail integrates with Todoist, Wrike, Monday.com, and Insightly CRM Zoho Mail gets new, making it easier than ever to seamlessly connect with your colleagues and customers directly from your inbox. It now supports Wrike, Todoist, and monday.com app extensions to provide easy accessibility to your tasks and projects from your mailbox. You can set up these extensions from Zoho Mail or you can also find them on Zoho Marketplace. Zoho Mail’s extension widget (eWidget) currently supports 25+ applications you can access directly from your Zoho Mail account, in addition to the various apps supported through iPaaS platforms like Zoho Flow, Zapier, Automate.io, Integromat, Blendr.io, and Workato. Zoho has unveiled Zoho TeamInbox, a shared inbox tool for managing group emails and enhancing team collaboration and transparency. It makes group emails accessible to the entire team in one collaborative space. Direct your emails from group email addresses like treasurer@, marketing@ to a shared inbox in Zoho TeamInbox, and give access to your team. Teams can now receive, read, and reply to emails from this shared inbox, so you will always stay in the same page. Emails can be assigned to any member, commented on, replied to, and then be closed once the task is completed—all from a single platform.


2020. Gmail for G Suite gets deep integrations with Chat, Meet, Rooms and Docs Zoho Mail users can now read and respond to your emails even when your Internet connection fails you. With the new Offline mode, all your recent email conversations are available offline. Zoho Mail syncs the preferred emails when online so you can read them internet-free at any time. It save your replies in your Outbox to automatically send as soon as you go back online. You can draft replies and create email templates in Offline mode, which is then synced instantly once your internet connection is back. If you're already hooked into our Desktop Lite client, you can reap the benefits of our Offline mode right from your desktop. Enable Offline mode in the client and you're good to go.