Zendesk is #2 in Top 18 Helpdesk software 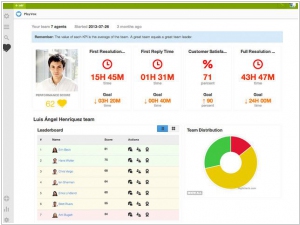 2020. Zendesk’s latest tools designed to give fuller view of the customer

Two years ago Zendesk, which is widely known for its help desk software, made the move to CRM when it acquired Base. A little later that year, it announced the Sunshine platform, which customers could use to build applications on top of the Zendesk platform. It has been working to integrate the CRM tool more broadly into the platform, and today’s announcement is about giving Zendesk users a broader view of its customers. Zendesk has a great amount of data at its disposal about the customer’s likes and dislikes based on interactions with the help desk side of the house. Zendesk announced a new enterprise content management product specifically geared for large customer service organizations. It’s called Guide Enterprise and it’s designed to provide those larger customer service organizations with a knowledge base and a content management platform for editorial planning and review. The idea is to empower customer service reps to write up solutions to problems they encounter and build up that knowledge base as part of the natural act of doing their jobs. The reps can find their fellow employees’ notes and not have to reinvent the wheel every time, and the notes and articles they write can pass through editorial review and become part of the permanent knowledge base. When customers hit the site or app, they can access solutions to common problems before having to talk to a human. The platform also includes reminders to check the content regularly so the knowledge base stays fresh and stale content is removed.


2016. Zendesk expands beyond the help desk Customer service app Zendesk unveiled a new product Zendesk Explore that provides analytics to measure and understand the entire customer experience. With Zendesk Explore, you get instant access to the customer analytics that matter—and the deeper understanding of your customers and business that comes with it. It's taking data from Zendesk’s myriad tools or third-party systems like customer data in Salesforce, buying history in Shopify or web analytics from Google Analytics and pulling it all together into one central place. It can deliver this information, regardless of role to get a much fuller view of the customer than you can get with bits of information trapped inside application silos. Zendesk, the leading customer support software, adds the new feature - Message - the messaging product that helps businesses engage customers on their favorite messaging platforms. The first of these messaging platforms is Facebook Messenger. Zendesk Message is easy to use and designed specifically for messaging. Since messaging interactions tend to occur in short bursts, we made it easy for agents to move quickly from one conversation to the next, while keeping it easy to assign, own, and resolve conversations. Agents will be able to easily reference important events in a long conversation stream with features like timeline.

Customer support giant Zendesk has acquired BIME Analytics for $45 million. BIME Analytics is a business intelligence startup with a software-as-a-service approach. It turns data from many different sources into trends and insights. The startup provides dozens of data connectors in order to aggregate data from multiple sources — Bigquery, CSV, Excel, Intercom, Google Analytics, Salesforce and more. You can name a data point for business intelligence purposes, and chances are BIME already supports it. Then you can create interactive dashboards, advanced visualizations or exploit the results using SQL queries. Everything is fast and distributed, you won’t have to manage servers to do these data manipulations. Helpdesk service Zendesk updated its phone support feature Zendesk Voice. The new version, built upon the Twilio platform, is now available in 39 countries. Leveraging Twilio’s global network of data centers, calls are delivered quickly and clearly. You can launch a call center in minutes by using built-in functionality that allows agents to make and receive calls from within the browser, or forward calls to another line. By bringing customer information, contact history and internal knowledge bases right into the agent desktop, providing phone support has never been easier. Cloud-based customer service app Zendesk has released a new feature called Zendesk Insights that purports to give companies a deeper understanding of their customer interactions, using data culled from simply working with the Zendesk service. This new tool gives access to pre-built dashboards that provide insights based on their industry, so, for example, if your industry average customer satisfaction score is 85 and yours is 80, you need to work on improving that. According to Sam Boonin, who is VP of products at Zendesk, this as a differentiator from competitors, whom he claimed only provide operational reporting, whereas Insights provides operational and behavioral data, thereby giving Zendesk an advantage. Zendesk, the cloud-based helpdesk software provider has made its first acquisition — Zopim, a Singapore-based startup whose flagship product is live chat software that is used by some 120,000 websites in 140 countries. The deal is worth up to $29.8 million. As a result of the Zopim acquisition, Zendesk will be phasing out its own chat software and integrating Zopim’s “superior” one into its platform. It gives Zendesk a product that is already widely used across hundreds of thousands of websites, representing an opportunity to sell those websites other Zendesk services if they do not use them already. It also, of course, gives Zendesk another product that it will be able to upsell existing customers with.


2013. Zendesk and HootSuite will help to survive in case of Zombie apocalypse On the eve of the Halloween Zendesk (SaaS service for customer support) and HootSuite (social media scanner) propose to think together about the important things. After all, the latest movies about zombies (in particular "World War Z") let us know one simple and terrible truth: Zombie apocalypse can happen any day. And the humanity can survive only thanks to proper sharing and using information. That is why, every IT company should think about how it could help. For example, Zendesk will help crysis organizations to support citizens and answer their questions about how to fight zombies. And even when all support staff die - the online knowledge base with the most frequently asked questions will work. (Watch video above). And HootSuite will notify you about  the Zombie apocalypse explosion, give you useful information and updates on #zombie hashtag, show you places on the map where alive and dead concentrate, by the number of posts from these areas. Watch the video: Customer support gurus from Zendesk have come to the conclusion (from their own experience) that most customers prefer to use self-service tools and quickly find the answer to their questions, rather than email/call support. That's why they developed (as they say) the world's best self-service portal Zendesk Help Center. It combines support forums (customer community), knowledge base and customer spaces, where they can send private or public requests. It supports mobile access (both for clients and tech support staff) and provides integration with social networks Facebook and Twitter. And the coolest feature of the new tool is the template editor that allows you to "seamlessly" integrate self-service portal in your website. You can choose a template from the library and edit it at the HTML level. We won't hide the fact that SaaS has the integration problem. Thanks to SaaS technology hundreds of thousands new business apps appeared on the market and many of them do their job very effectively. But if a company uses several effective (but separate) apps, it may face situations like in the new Zendesk video. Three departments (sales, support and the engineer on scooter) are trying to solve one customer's issue. They use three different systems in which the same customer has a different ID, different communication history and different priority. So, what to do? Integrate and increase the value of each separate SaaS service! Zendesk Apps directory already includes more than a hundred of applications and one of the latest Zendesk partners is amoCRM, that tries to do the same thing. If you watch almost any promotional video about today's IT systems (for example the latest movie by Salesforce) - you'll see that people now work everywhere - on the street, in the subway, in the park, on the beach, in the woods, on the mountain, on a boat, on the snow - anywhere. Have you seen this in the real life? No? Me too. Zendesk (the SaaS service helping to support customers) makes fun on this trend. They released the new mobile app for the iPad together with the epic video (watch it). And the bonus (below): Harlem Shake (Zendesk Edition): Today's Friday post is dedicated to support agents and those who organize helpdesk service. Here are two interesting stories about why the customer support system should be social. The first story was created by the guys from the helpdesk-service Zendesk (watch video). It's about the support agent who is always hanging on the phone, repeating the same phrases and answering the same questions. The second story is pitched by IBM with really scary title - "The Man Without Email". Here is he: