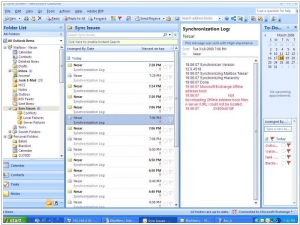 Microsoft Exchange Server is the server side of a client–server, collaborative application product developed by Microsoft. Exchange's major features consist of electronic mail, calendaring, contacts and tasks; support for mobile and web-based access to information; and support for data storage.

The best alternatives to Microsoft Exchange are: Microsoft 365, GMail, Outlook Recently, Google released the next anti-microsoft tool - Google Apps Migration for Microsoft Exchange, the plugin which allows you to easily move mail, calendars and contacts from Exchange to Google Apps. Last year they released the utility that syncs Outlook with Google Apps, but now you can import data directly from the Exchange server. Previously, Microsoft just ignored such events, or commented that Google Apps - is just a toy that no serious company will use. But Google's constant pressure is making them nervous. Microsoft recently launched the channel on Youtube, which contains videos explaining why MS Office products are better than Google's. For example, here's the video Exchange vs GMail:

Microsoft officially released the new version of its enterprise email server Exchange Server 2010. It's desktop client Outlook 2010 will appear only next year together with other Office 2010 applications. What is the most interesting about Exchange 2010? First, thanks to Windows Server 2008 R2 and Windows 7 (details here), and some new features in the new version, Exchange 2010 is now completely adopted for the cloud deployment. Of course, Hosted Exchange 2007 has been already provided for some years, but the latest version is much more secure, reliable and suitable for administration, when installed on the remote server (or in data-center). Today Microsoft has officially announced the new version of its Email collaboration solution Exchange Server 2007. The main concept of the new Exchange version is unified messaging. It means that employees can work with e-mail, voice mail and faxes in a single interface. And thanks to the integration with MS Office Communications Server, text-to-speech and voice recognition technologies now you can dial to your mailbox and listen to the new email-messages. But these features are available only in more expensive edition Exchange Enterprise. In addition, the new Exchange version includes antivirus and antispam protection, tools for backup and data replication (that significantly increase the mailbox size), the new feature Outlook Anywhere, that lets you connect Outlook to the Exchange server via the Internet. Besides, Exchange 2007 only runs on 64-bit architecture . Microsoft has released the new version of its e-mail server Exchange Server 2003. Now, this system can be really called "e-mail server", because Microsoft has decided to divide some of its functions between other products. The built-in Exchange messenger has migrated to Microsoft Office Live Communications Server, and the web-conferencing server - to Live Meeting. In addition, Microsoft now recommends to share files not with Exchange, but on the intranet portal Sharepoint (although the Exchange public folders are still included). Thus, Exchange Server will be used just to manage e-mail, contacts, calendars and tasks. From the other hand Exchange Server 2003 got the new functions from the mobile server Microsoft Mobile Information Server and using a mobile the web client Outlook Mobile Access and server-side Exchange ActiveSync (to sync mobile email-client with server) allows users to work with e-mail, calendars and tasks on their mobile devices. Microsoft has released the new version of its collaboration solution Exchange 2000 Server. Unlike its predecessor, which included inbuilt directory service, Exchange 2000 fully relies on the external directory service Windows Active Directory, and because of this, many users may have big problems with this upgrade. Also Exchange 2000 Server includes a built-in messenger Exchange Instant Messaging (which supports any IRC-client) and web-conferencing service Exchange Conferencing (which works with Outlook 2000 and NetMeeting). Another new feature in Exchange 2000 is called Web Store - it's a file system that allows to organize and easy search for unstructured data inside Exchange, like web pages, documents, email messages .


1999. Lotus is losing ground to Exchange

According to the recent IDC report, the leader of the groupware market is changing. In the first half of this year, the number of sold MS Exchange licenses (8.1 million) has already exceeded the number of sold Lotus Notes / Domino licenses (7.4 million). The third place, as before, is occupied by Novell GroupWise, but with a considerable lag (2.69 million). Even last year, Lotus was confidently leading the groupware market, but continued delays in the new version of Lotus Notes / Domino 5 release was the main reason of why many new customers opted to go with Microsoft Exchange. Although Lotus Notes is still ahead of Exchange on the number of sold licenses in Europe and Asia, and still boasts the larger client base, acquired over the past years. The new version of Microsoft's mail server Exchange Server 5.0 includes the Web interface Exchange Web Access, which enables users to access information in the Exchange via Internet browser. However, to get this opportunity you'll have to pay for a client license, even if you do not have a mailbox on the server. In addition to the new web client, Exchange Server now has a new desktop client - MS Outlook 97, which is a part of MS Office 97 and replaces the calendaring app Schedule+ and e-mail client Exchange Client. In addition, the new Exchange features support of messaging protocols SMTP and POP3, as well as directory access protocol LDAP. The standard version of Exchange Server is priced at $ 999 for the server license.

After the long two-years development cycle, Microsoft launches its Email server Exchange, that will replace Microsoft Mail and try to compete with Lotus Notes and Novell GroupWise, which dominate in the groupware market. During the closed testing Microsoft has already migrated 60,000 corporate clients to Exchange, but this is a drop in the bucket compared to 15 millions Lotus Notes customers and 5.5 millions GroupWise customers. The advantage of Exchange over its competitors is the ability to sync folders with mobile devices. As for the desktop, Microsoft Exchange client is already included by default in Windows 95. Specially for MS Exchange release the competitors created utilities that help to migrate data from Microsoft Mail to Lotus Notes and Groupwise. Because now MS Mail users have to migrate to a new product anyway, so they will have 3 options.