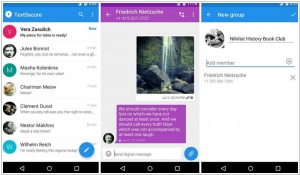 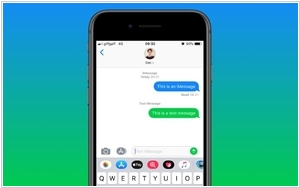 iMessage lets you send messages back and forth with anyone on iPad, iPhone, iPod touch, or a Mac. If you’re a texter, you’ll love Messages on iPhone, iPad, and iPod touch. Now they all come with iMessage, a service that’s an even better kind of texting. Because it’s free for you and anyone texting over Wi-Fi using an iOS device or Mac with iMessage.
Signal vs iMessage in our news:
2021. Signal expands encrypted group video calls to 40 people Google Search is now available within iMessage. In an effort to more deeply integrate Google’s search engine on iOS devices, the company announced today that its Search app for iOS has added an iMessage extension, allowing iPhone and iPad users to search the web, then quickly add those search results to their iMessage conversations. With Google’s iMessage extension, users can type a query in the search box, or tap a button below for a specific type of search – like Weather, Food, Nearby (venues/businesses), Trending (news), or Videos. Each search result includes a “Share” button that, when tapped, adds the item directly into an iMessage conversation as card. When the recipient taps on the card, they’ll go to the Google search result. Apple debuted iOS Business Chat for its Messages application, a chat-based customer service channel for businesses. Essentially, it's a live-chat function in Apple's iMessage ecosystem that connects with the 1 billion active Apple iOS apps device users use — Apple Maps, Siri, Search and their own website and apps. Customers can also use it to pay for items through Apple Pay or schedule follow up support sessions through calendar integration. Customers will be able to from inside their iOS messenger platform connect with businesses through chat, pay for items, share photos of broken products, share videos and book flights after choosing seats.


2015. iMessage and FaceTime get two-factor authentication Apple has improved the security of FaceTime and iMessage, its voice/video and multimedia chat communication tools. The services received two-factor authentication as an option for users to enable, meaning that even if someone uses their Apple ID email and password to enable iMessage or FaceTime on a new device, they’ll still need to use a PIN from an existing trusted device to gain access to those services. If you’ve previously enabled two-factor for iCloud, it’ll also be enabled to FaceTime and iMessage. The additional level of protection applied to these services helps ensure that people will have a harder time grabbing potentially private images from your iMessage history, or pretending to be you via online communication methods.