Dropbox is a Web-based file hosting service that uses cloud computing to enable users to store and share files and folders with others across the Internet using file synchronization. There are both free and paid services, each with varying options. In comparison to similar services, Dropbox offers a relatively large number of user clients across a variety of desktop and mobile operating systems.
7
Zoho WorkDrive 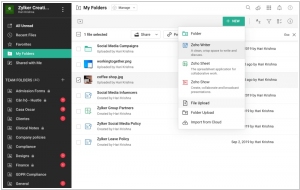 Zoho WorkDrive is a central document repository for all types of documents. Store and share files securely and access them anywhere anytime. Zoho WorkDrive provides a Online Workspace for documents. It makes file sharing easy and Collaborate with your friends, team members, colleagues, etc on multiple documents. Manage your document review process by creating and maintaining multiple versions of a document.
DropBox vs Zoho WorkDrive in our news:
2021. Dropbox to acquire secure document sharing startup DocSend for $165M Zoho's Docs passes on the baton to Zoho WorkDrive. WorkDrive has been designed from the bottom up to serve the needs of the team as a cohesive work unit. Team-wide collaboration, sharing, and distribution of content - from draft to final copy - is built into the product explicitly. A range of collaboration tools, such as drafting, notifications, commenting, and activity tracking, enable joint work. More than just a file storage platform, WorkDrive comes with a full-featured cloud Office Suite that includes a spreadsheet app (Zoho Sheet), a document editor (Zoho Writer), and presentation software (Zoho Show). WorkDrive offers a desktop app that lets you sync files to multiple computers, edit them offline, and perform complete or partial syncs back to the cloud. This, along with native mobile iOS and Android apps, enables work and engagement from any device or location.

Zoho is launching a major update to its core office suite products: Zoho Writer, Sheet, Show and Notebooks. These tools are getting an infusion of Zoho’s Zia AI assistant. With this, you can now ask questions about data in your spreadsheets, for example, and Zia will create charts and even pivot tables for you. Similarly, Zoho is using Zia in its document editor and presentation tools to provide better grammar and spellchecking tools (and it’ll now offer a readability score and tips for improving your text). In Zoho Notebook, the note-taking application that is also the company’s newest app, Zia can help users create different formats for their note cards based on the content (text, photo, audio, checklist, sketch, etc.). Zoho Writer is getting some new features. You can now link headings to the text below by asking Writer to Keep with next. This will ensure that no breaks are inserted between the paragraphs you select. Table controls are now more granular and better organized. The new distribute options can make all your rows and cells evenly spaced in one click. The new Continue With Previous List option is perfect when you’re trying to merge two separate numbered lists—separated by a paragraph in between—into a single series. Besides, the app gets a brand-new look for your published pages, date-format customization, responsive embeds.