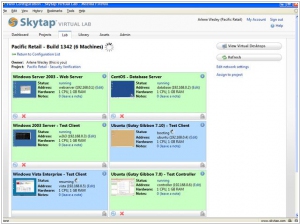 Alternative enterprise cloud provider Skytap has raised a $45 million Series E funding round led by Goldman Sachs Private Capital Investing, with participation from existing investors. This brings Skytap’s total funding to date to $109 million. Skytap is going up against all of the major cloud service providers like AWS, Azure and Google Cloud Platform, but Skytap CEO Thor Culverhouse argues that his competitors’ clouds were built for greenfield applications while Skytap was specifically built to serve Fortune 500 companies that want to slowly modernize their enterprise applications. The idea, of course, is for these enterprises to then stay on the Skytap cloud as they adopt new development paradigms like microservices and technologies like software containers.


2014. Skytap gets $35M for its cloud development environment Skytap, the service that aims to help enterprise development and test teams work more efficiently (and test their code more often), announced that it has raised a $35 million funding round led by Insight Venture Partners. With Skytap, enterprises can re-create their production environments in the cloud to more effectively test their applications before they go live. The company says it will use the new funding to “fuel new levels of product innovation for enterprise-ready development and test environments,” and to expand its go-to-market capacity and bring more partners on board. Skytap was originally called Illumita and previously raised $29.5 million.