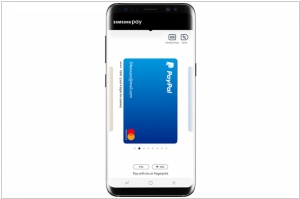 Samsung’s mobile payments app that uses both near-field communications (NFC) and magnetic secure transmission (MST) technology. It’s brought MasterCard and Visa to the table as partners along with four of the largest card-issuing banks: JP Morgan Chase, Bank of America, Citi and US Bank. Mobile payment platform Samsung Pay, which lets users keep all their bank cards in virtual form on their phone and use them for contactless payments, has partnered with Mastercard to add support for Masterpass, a digital wallet solution that stores users' payment and shipping information, making online payments easier. The service will become available to users in early 2017.  U.S. Samsung Pay users are also getting support for in-app payments in November. They'll be able to select Samsung Pay when paying in merchant apps that support the platforms. Finally, the new Deals feature will automatically locate nearby discounts and coupons in stores and restaurants; users will be able to instantly redeem these deals. Samsung Pay, the device maker’s competitor to rival NFC-based payment services including Apple Pay and Android Pay, is now live in the U.S. following its earlier launch in South Korea, where it saw over $30 million in transaction volume during its first month. The payments platform, based on technology acquired from LoopPay, gives Samsung what it hopes will be a competitive advantage in the payments market, as it’s not limited to NFC-based payments alone. Instead, Samsung Pay offers a way for consumers to pay using their Samsung smartphones via either NFC technology, like Apple and Google’s solution, or by emulating a magnetic stripe card. That, Samsung hopes, will give its mobile payments service the edge in the near-term. And as payment terminals move to support EMV and NFC technology instead, Samsung Pay will continue to work with them, too.


2015. Samsung and MasterCard to launch Samsung Pay together in Europe Samsung and MasterCard will extend their partnership to launch the mobile payment system Samsung Pay in Europe. Powered by LoopPay, the Apple Pay competitor that Samsung acquired earlier this year, Samsung Pay is supposed to launch in the U.S. soon and began trials in South Korea earlier this month. Smartphones with Samsung Pay will use MasterCard Digital Enablement Service (MDES), the same system used in the iPhone 6 and the Apple Watch to enable contactless payments through NFC. One of the key differences between Apple Pay and Samsung Pay, however, is that the latter supports magnetic strip technologies (MST) in existing sales terminals, so retailers don’t have to upgrade their equipment in order to use it. Samsung has said that MST will allow it to reach up to 30 million merchants worldwide, as long as partnerships with payment providers fall into place. Samsung announced a new mobile payments solution Samsung Pay that will arrive on the new Galaxy S6 and S6 edge smartphones this summer. And though Apple and Google may have brought their contactless payment technologies to the market first, but Samsung Pay fills in sizable gaps that Apple Pay and Google Wallet have in their services. Samsung Pay uses both near-field communications (NFC) and magnetic secure transmission (MST) technology from LoopPay. That means that it can not only make the same secure contactless transactions that Apple Pay can, but it can also make “swipe” purchases on the vast majority of older payments terminals that haven’t upgraded to NFC. Samsung brought MasterCard and Visa to the table as partners along with four of the largest card-issuing banks: JP Morgan Chase, Bank of America, Citi and US Bank.

Samsung has acquired the mobile payments platform and Apple Pay rival LoopPay. LoopPay allows users to make mobile payments via their smartphones. But unlike Apple Pay, which uses near-field communications (NFC), the company uses magnetic secure transmission (MST), similar to the magnetic strip on traditional credit cards. Users store credit card information in a digital wallet via LoopPay's app (it's on iOS and Android), but transactions also require the company's $59.95 card case or $10 key fob, which enable the MST payments. LoopPay has previously touted its platform as being better and more widely accepted than Apple Pay — since it uses external hardware, it doesn't require merchants to adopt the same type of technology as Apple Pay — although the necessity of extra hardware adds an extra, potentially awkward step, to transactions.