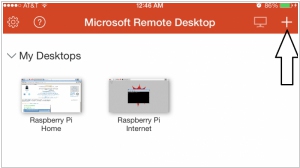 With the Microsoft Remote Desktop app, you can connect to a remote PC and your work resources from almost anywhere. Experience the power of Windows with RemoteFX in a Remote Desktop client designed to help you get your work done wherever you are.

When you working at office, you probably using desktop PC. And when you go out of the office, you probably take your iPad or Android-tablet. And, probably, sometimes you have problems because of that. For example, you forget to copy file to the tablet, or copied it, but it does not open on tablet. But what if you could remotely open your desktop screen on the tablet and work with it as if you are in the office? You could open all files, applications, and don't care about the differences of operating systems. This trick can be done by the Remote Desktop apps. Microsoft has just released such app for iOS and Android. Of course, some similar apps existed until now, but it's always nice to have the official version. Especially because it's free. Maybe it's a small compensation for those, that can't help waiting for MS Office version for the iPad and Android-tablets.