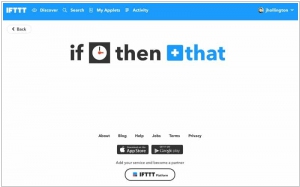 IFTTT is a service that lets you create powerful connections with one simple statement: If This Than That. Channels are the basic building blocks of IFTTT. Each Channel has its own Triggers and Actions. The this part of a Recipe is a Trigger. Some example Triggers are “I’m tagged in a photo on Facebook” or “I check in on Foursquare.” The that part of a Recipe is an Action. Some example Actions are “send me a text message” or “create a status message on Facebook.”

The best alternatives to IFTTT are: Zapier, Microsoft Power Automate