Microsoft Teams is the chat-based workspace in Office 365 that integrates all the people, content, and tools your team needs to be more engaged and effective.
6
SAP Jam 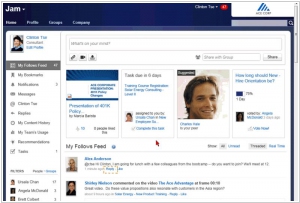 2020 - Microsoft Teams is getting push-to-talk feature

2018 - Microsoft Teams gets bokeh and meeting recordings with transcripts

2018 - Microsoft Teams gets a free version

2018 - Microsoft Teams will integrate with Cortana to defeate Slack

Microsoft Teams, rolled out its biggest update since the software’s launch last year. The focus of the new set of features is allowing users to better work with apps – something Microsoft Teams accomplishes via Slack-like integrations, search and discovery features, commands, and more. For example, Microsoft Teams now offers a way to search for apps from the new app store where you can browse by category or search by name, category or integration type – like Project Management or BI. Slack, of course, also has its own app directory, which has allowed it to highlight all the work tools that currently work with its team collaboration resource – a move that helped it gain traction in the workplace. The conclusion is that Microsoft Teams is now more integrative than Slack

2017 - Microsoft upgraded Teams for Enterprises to strike back at Stride

Microsoft announced a significant upgrade to its Teams collaboration app this week, bumping up the number of people allowed in a single Team from 999 to 2500. When Teams launched last November, people speculated the app was Microsoft's answer to Slack and Stride for Office 365. But with the original Team size limit of 999 people per team, Teams remained an attractive option for small-to-medium enterprises, but held limited appeal for larger organizations. Since its release, one of the most frequently requested improvements from users was an increase to that limit. For companies with over 15,000 employees — in other words, the companies Microsoft appears to be targeting — a 2500 limit is unlikely to be a big enough increase. The conclusion is that Microsoft Teams becomes more enterprise-ready in comparison to Stride