Online file storage and syncing service working as a file system for other Google's services. Allows to sync files between all your computers and mobile devices or collaborate on files with your team and partners. Version control, OCR, powerful online viewer. Provides 5 GB free disk space.
8
Nextcloud 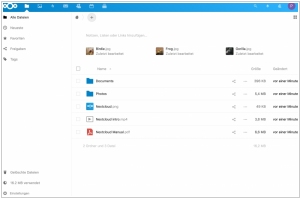 Nextcloud is the most deployed on-premises file share and collaboration platform​. Access & collaborate across your devices.
Google Drive vs Nextcloud in our news:
2018. Google Drive added comments to Microsoft Office files Google still doesn't want to add social intranet to its office suite - hopes that we'll use Google+ for this purpose. But at least they add social tools to existing services. Today the cloud file storage Google Drive gets activity feeds, that allows to track the actions of your colleagues by project or by specific file. It works like this: you open the folder and press the "I" button - the right panel shows the activity feed for this folder with such actions as moving and deleting files, renaming, uploading, sharing, adding comments. If you want to see the log by specific files - just select them in the list. The new feature will appear in all accounts during the week.