Duda’s website builder enables you to create a responsive website with no need to code. Simply import all of the content from an old site into a beautiful new website template that can be customized by device. All Duda websites not only look great, but follow Google’s SEO best practices and come with loads of business-driving widgets.
8
Jimdo 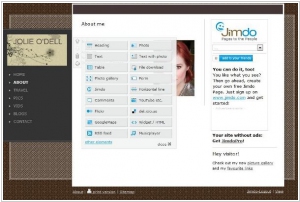 Website search makes it even easier for your visitors to find exactly what they’re looking for on your website. This new feature is now available for all JimdoBusiness websites using Jimdo Creator. You can add it as an element wherever you want on your website. Once you’ve added the search function, you can search for any items or words in your website. You can also customize the placeholder text in the search bar (“Search …” is the default) but you can just as easily change it to “Looking for something in particular?”, as well as determine which areas of your website to include in the search results. If your Jimdo Creator website offers services, events or courses that require booking an appointment, our new Jimdo Booking app for Android is perfect for you. You can now create a booking calendar via your smartphone that is displayed to visitors on your website. Once you set up your calendar, visitors can book your services directly on your Jimdo website. As soon as someone books one of your offers, you will receive a push notification directly in the app so you’re always up to date with how many people have made a booking. Site-building service Jimdo has raised a €25 million investment from Spectrum Equity. Founded in 2007 by Christian Springub, Fridtjof Detzner, and Matthias Henze, the company has been profitable since 2009. Jimdo was the first website builder to become cross-platform with the release of its iOS app in 2013 and its Android app in 2014. The company employs 200 people in Hamburg, San Francisco and Tokyo. The platform is available in eight languages and has helped people to build more than 15m websites. Jimdo developers say that users can now expect Jimdo to become a stronger, faster, and more flexible company than ever before.