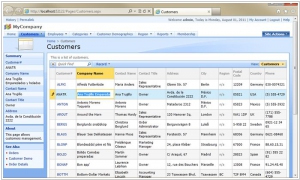 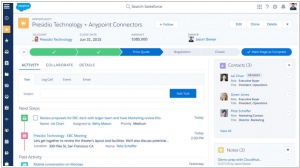 Private AppExchange is integrated with the mentioned above SSO-service Salesforce Identity, so that app installation and launch - is as easy as installing app from Play Market or App Store.

For paid Salesforce Enterprise users this market is free. And for the rest - $5/month per user.

Force.com is backed by cloud DBMS Database.com. And developers, depending on their skills and goals, can select one of five options:

- AppForce - platform for rapid app development. It allows to build apps with 80% clicks and 20% code

- ISVforce - platform for SaaS providers, where they can host and manage internet services, sell them at AppExchange marketplace Existing Java-applications can now be ported from the local server to Force.com without any adoption. And besides all these tools for deploying Java-apps in the cloud, the developers get access to a vast customer base of Salesforce. They can develop independent cloud applications or Java-addons for Salesforce CRM.

Until now, developers couldn't create Java-applications on Force.com. Taking into account the huge Java popularity in the enterprise, VMForce.com will become the significant advantage for the cloud market leader. Recently Salesforce also launched the similar project to integrate the development environment Adobe Flash + AIR to Force.com.

Pricing for VMforce has not been established yet, and the offering will be available for a developer preview later in the year.

Salesforce rolled out a new capability, called Force.com Sites
that lets companies build and run their online applications for internal use
as well as public use on Salesforce.com cloud computing platform. The new feature lets companies build a database with established privacy settings, create public sites with a variety of programming languages, including HTML, JavaScript Flex and CSS, access analytics, register domains and more. The company originally announced the Force.com Sites capability last winter, signaling Salesforce’s ambitions to expand Force.com’s cloud into hybrid applications that span both internal enterprise customers and the customers of those applications. Salesforce is also announcing a free edition of Force.com, giving small businesses and entrepreneurs a budget friendly way to use Salesforce’s platform.


Salesforce.com next week intends to detail an extension to its Web-based developer platform that it claims will put it on par with traditional offline development tools.

At the Dreamforce developer conference in San Francisco next week, company executives will introduce Force.com, the new name for a set of tools and hosted services for building hosted Web applications.

It will also introduce an addition to its hosted development platform called Visualforce, a service that allows a developer to create a customized application user interface. Conference attendees will get access to a developer preview of Visualforce.

Visualforce complements existing developer-oriented services, including Apex, a language meant to speed up creation of applications that run on its platform.

The introduction of the user interface service is significant because it makes Salesforce.com"s hosted development platform a more viable alternative to Java or .Net, said Adam Gross, vice president of developer marketing at the company.

Whereas Salesforce.com applications are typically sold to salespeople, its Force.com development platform is aimed squarely at IT managers and chief information officers, said Gross.

"This user interface layer allows the applications that we serve to be opened up to new classes of users and devices," he said. "A different kind of person (than the Salesforce.com application customer) is buying this for a different reason--the same person who is making .Net of Java buying decisions."

For those who don"t attend the Dreamforce conference next week, the technology preview of Visualforce will be available in the fourth quarter this year.