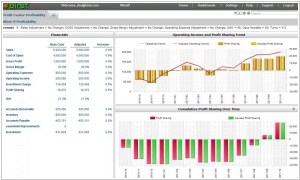 Infor Birst is the only Enterprise BI platform born in the cloud. Find out why more than a thousand businesses rely on Birst for Enterprise BI. Learn to think fast. Enterprise-caliber BI delivers accurate, actionable content in an intuitive, self-service business intelligence environment. It allows users to combine data from different source systems in a single BI platform to get answers to their most pressing business concerns in real time. And, when the questions change, it adapts quickly to the new request.
27
Tableau

Tableau complements your natural ability to understand data visually. Our breakthrough products let you create rich analyses and share your insights with colleagues in seconds. Connect and visualize your data in minutes. Tableau is 10 to 100x faster than existing solutions. From spreadsheets to databases to Hadoop to cloud services, explore any data with Tableau.
Birst vs Tableau in our news:
2019. Salesforce acquires data visualization company Tableau for $15.7B Birst, a cloud-based business intelligence (BI) platform, has raised another $65 million in funding. The problem that a company Birst is tackling is the fact that businesses are collecting a mass of information electronically that, looked at intelligently, could help them make better strategic decisions. While there have been companies like IBM and others offering business intelligence solutions for some time now, the problem is that many legacy offerings are on-premise and are not able to cope with newer forms of data, let alone use newer algorithms to extract information, or the fact that these days it may be as likely that a person on the business side wants direct access to this information, bypassing heavy lifting from a data analytics team.