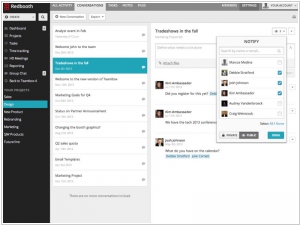 Slack brings all your communication together in one place. It's real-time messaging, archiving and search for modern teams. Create open channels for the projects, groups and topics that the whole team shares. Slack searches whole conversations, not just individual messages, so you can find what you’re looking for no matter who said what or when they said it.
Redbooth vs Slack in our news:
2021. Slack now lets you DM employees in other companies

Slack has acquired Missions, the app that allows Slack users to build tools to automate simple routines without code. Missions’ technology lets people create workflows for tasks that they might normally have to talk about inside Slack and then carry out the process off-chat. With Missions, Slack hopes that users can help teams boost productivity by making things more simple for a variety of repeatable processes. Other potential areas for the app to help users include managing approvals and rejections in the hiring process, as well as internal ticketing.

Slack’s search functions are getting another little quality-of-life update with the introduction of filters, which aims to make search a little more granular to find the right answers. The company also says searches are going to be more personalized. All of this is an attempt to get to the right files or conversations quickly as Slack — a simple collection of group chats and channels that can get out of hand very fast — something a little more palatable. As companies get bigger and bigger, the sheer amount of information that ends up in it will grow faster and faster. That means that the right information will generally be more difficult to access, and if Slack is going to stick to its roots as a simple internal communications product, it’s going to have to lean on improvements under the hood and small changes in front of users. The company says search is now 70 percent faster on the back end.