monday.com is an intuitive team management platform for effective teamwork. Teams use monday.com to plan, organize and track their work in one visual, collaborative space.
9
Nozbe 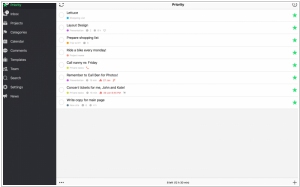 Using Nozbe to manage your time is easy. Inspired by world-famous GTD (Getting Things Done) methodology. Thanks to our desktop and mobile web applications as well as our native Android, iPhone and iPad apps everyone in your team can access Nozbe on their favorite devices. We are world-first to offer such flexibility!
Monday.com vs Nozbe in our news:
2020. Monday.com now lets companies build custom apps 
2012. Nozbe Desktop is available for Mac and Windows Nozbe is finally launching our desktop application for Mac and Windows. Thanks to Nozbe for Desktop, both Mac and Windows users will be able to install Nozbe on their computers and get things done a lot faster even when they are not connected to the Internet. It’s a totally redesigned user interface for Nozbe with flows and ideas. The native app is just faster, it works offline (without internet connection), and thanks to the fact that you have your local app, you have a copy of your most important stuff on your computer. The Nozbe developers say that the app will be free forever as well as iPhone, iPad and Android apps. But you need the Nozbe subscription to sync your data between your apps.