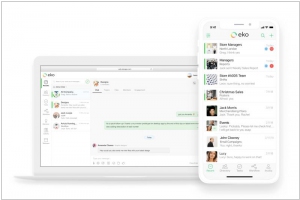 Slack brings all your communication together in one place. It's real-time messaging, archiving and search for modern teams. Create open channels for the projects, groups and topics that the whole team shares. Slack searches whole conversations, not just individual messages, so you can find what you’re looking for no matter who said what or when they said it.
Eko vs Slack in our news:
2021. Salesforce announces first integrations with Slack