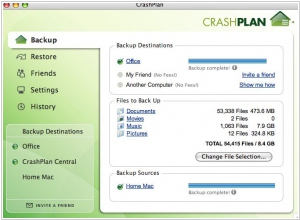 CrashPlan backup software offers the best way to back up and store personal, business and enterprise data securely - offsite, onsite and online in the Cloud. CrashPlan makes it easy to protect your digital life, so you can get back to what’s important in real life. Even when you step away, CrashPlan is busy at work protecting all your important files. Music, photos and documents are all automatically, continuously protected, so you can get back to whatever life throws your way.
39
DropBox

Dropbox is a Web-based file hosting service that uses cloud computing to enable users to store and share files and folders with others across the Internet using file synchronization. There are both free and paid services, each with varying options. In comparison to similar services, Dropbox offers a relatively large number of user clients across a variety of desktop and mobile operating systems.
Crashplan vs DropBox in our news: