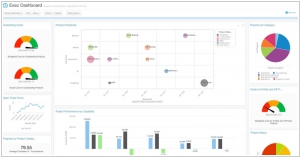 Microsoft Project is a project management software program developed and sold by Microsoft which is designed to assist project managers in developing plans, assigning resources to tasks, tracking progress, managing budgets and analyzing workloads. The application creates critical path schedules, and critical chain and event chain methodology third-party add-ons are also available. Schedules can be resource leveled, and chains are visualized in a Gantt chart.
Clarizen vs Microsoft Project in our news:
2021. Planview acquires Clarizen and Changepoint Planview announced the acquisitions of two industry leaders: Clarizen, a global leader in enterprise Collaborative Work Management, and Changepoint, a leading enterprise Portfolio Management provider. As a result of the transaction, Planview, Clarizen and Changepoint customers will benefit from being part of a premier community of PMOs, PPM, and Professional Services Automation (PSA) practitioners. The expanded portfolio of solutions will provide customers the tools and resources to better strategically plan and deliver on their most important initiatives. The combination will be transformative for the industry and has received strong feedback from customers to date. The close of the transactions closely follows Planview’s acquisition in December 2020 by TPG Capital and TA Associates, whose investment has focused on accelerating Planview’s growth and vision for Agile and PPM for Enterprises. Clarizen and Changepoint are the company’s largest acquisitions to date and represent an important first step in Planview’s growth strategy for 2021. Clarizen 3.0 adds a variety of new features, including the option to manage business issues, track expenses, and view Gantt charts. The company also tweaked Clarizen's design and added more tutorials to its site to make it easier for users to learn how to use Clarizen. The two major updates in this version - Issue management and Expense management. Clarizen's Issue management pane allows project managers to highlight problems with the project, assign someone to solve the problem, and describe exactly what needs to be fixed. In the Expenses pane, you can create an expense report. You can input your own expense description or pick those created by the project manager. If the project manager created expense categories, you can choose the appropriate item from a drop-down list. If not, you can add your own.Clarizen plans start at $24.95 per user per month up to $49.95 per user per month, depending on the number of licenses you need and the length of time you plan to subscribe to the service

Israeli startup Clarizen positions itself as a project management and collaboration tool specifically aimed at non-project managers. Of course, Clarizen is a latecomer to the space, but they seem to have the right ingredients: A fairly convenient interface, a smidgen of unique differentiation. Clarizen was designed as a PM tool for operational/functional managers. This is a good move because the biggest failing point in project management is probably during the set-up stage which requires the project be planned out to the “T” before it can be rolled out. This is a process that requires a high level of familiarity with such methodologies, so it’s no surprise why non-professional project managers bail on it so often. Clarizen deals with this basic problem by allowing the project participants to assist in the planning, even if the project has already begun. The collaborative planning and execution can transpire among teams working within the same organization, or among those whose resources are dispersed between two or more companies.