Basecamp tackles project management with a focus on communication and collaboration. Making to-do lists and adding to-do items literally just takes seconds. Basecamp is optimized to make the things you do most often really fast and really easy. Basecamp mobile is especially made for popular mobile devices like iPhone and Android.
12
Teamwork 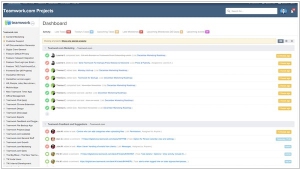 Teamwork was created because we needed a better way to run our own business and existing software was either too basic or too confusing. Teamwork is practical software that gets you organised so that you can reduce unnecessary meetings and simply Get Things Done. By using Teamwork.com, your team will be organised, your clients will be impressed and your business will take off.
Basecamp vs Teamwork in our news:
2020. Basecamp launches Hey, a hosted email service for neat freaks