Asana is the shared task list for your team, where you can plan, organize & stay in sync on everything.As fast as a text editor. Plenty of keyboard shortcuts, fewer page loads and mouse clicks. Asana is one app that won't get in your way.
2
Flow 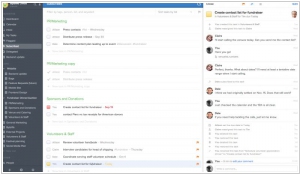 Flow’s flexible team project management software is designed for any project or workflow. Plan ahead, set priorities and track projects from start to finish. From simple checklists to kanban boards, we’ve got you covered.
Asana vs Flow in our news:
2018. Work management software provider Asana gets $50M