The future of business is digital. DocuSign helps businesses of all sizes easily and securely sign, send, and manage documents in the cloud, with unmatched availability and legal enforceability. Go 100% digital with DocuSign. Securely sign and manage documents online from any device with the most widely used e-signature solution
2
HelloSign

HelloSign's secure electronic signatures are business-caliber, easy-to-use, and legally binding. Getting documents signed has never been simpler. We've removed paper entirely from the process and built tools to facilitate document signing, tracking and management. Notifications keep you apprised of the signer's activity and our audit trail logs it. Once completed, signed documents are securely stored and accessible from the cloud so you can always get to your important documents.
3
SignNow 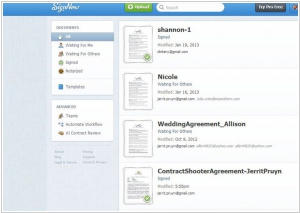 The Most Secure and Top Rated eSignature Solution for Business. SignNow cuts document turnaround time by as much as 90%. Get legally binding signatures from your customers, partners and employees in seconds using any device. Never search for a signed paper agreement again. Gain control over your document workflows, electronically secure your critical documents and easily integrate with other systems.
4
Adobe Sign 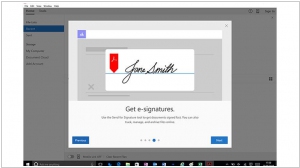 Adobe EchoSign is the electronic signature solution you can trust, from the company that brought you PDF and Acrobat. Organizations of all sizes rely on it to get documents signed and close business—easily, securely, on any device.
5
PandaDoc 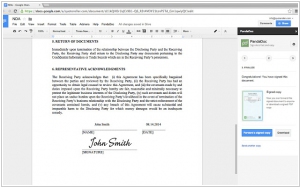 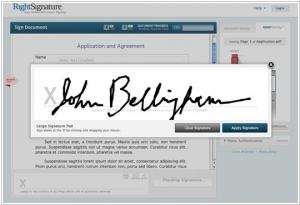 The easiest, fastest way to get documents filled out and signed online. Use Your Existing Documents. Upload a PDF, Word DOC, or many more Enable your customers to e-sign documents while traveling. Obtain electronic signatures in person.
7
SignEasy 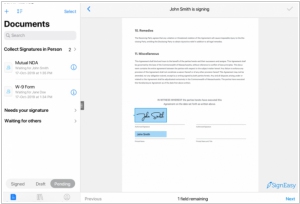 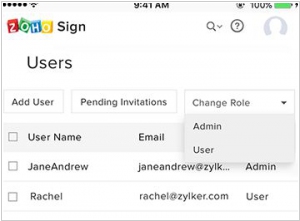 Complete digital signature app for business. With Zoho Sign, you can carry out the entire signing process from the cloud and seamlessly close deals in minutes.
9
Adobe Document Cloud 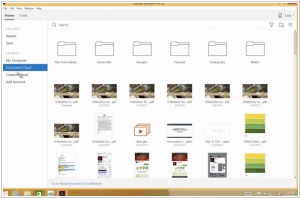 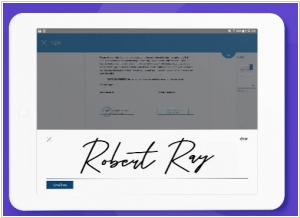 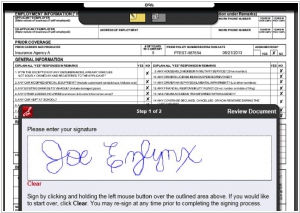 MyDoX is perfect for small and medium-sized businesses who want to start getting documents signed online right away. You can access this cloud-based software on any computer or mobile device. There’s nothing to download or install, so implementation is quick and easy. One of Slack’s main strengths has always been the ability to complete a set of tasks without having to move between multiple applications. DocuSign introduced electronic signature integration inside Slack at the height of the pandemic in 2020. Today, the company announced you can handle the entire contract lifecycle without leaving Slack. DocuSign has been looking at various ways of integrating the signing process into the SaaS tools people are using most. This builds on the company’s announcement earlier this year about document signing in Zoom, another application that exploded in popularity during the height of the pandemic lockdown.


2021. Yousign raises $36.6M to build a European alternative to DocuSign French startup Yousign has raised a $36.6 million Series A. You may be familiar with DocuSign, Adobe Sign, SignNow, HelloSign and a bunch of other players. But none of them have been designed for the European market from the ground up. Yousign wants to become the European alternative to these American companies. More specifically, the startup thinks it can convince small and medium companies that aren’t using an e-signature solution yet. Instead of asking DocuSign customers to switch, Yousign wants to convert new customers to e-signatures. Like other e-signature services, you can create document templates, approval workflows and reminders. Yousign makes sure the right person is signing the document with strong authentication processes and all events are timestamped. It’s a SaaS product, which means you have to pay a subscription fee to access the service. PandaDoc, the startup that provides a fully digital sales document workflow from proposal to electronic signature to collecting payment, announced a $30 million Series B extension today. Part of the company’s growth strategy is using their eSignature tool to move people to the platform. They made that tool free in March just as the pandemic was hitting hard in the U.S., and it has proven to be a lead magnet to get more people familiar with the company. Once they do that he says, they start to look at the broader set of tools and they can become paying customers.

DocuSign, which pioneered the e-signature, is gearing up to go public in the next six months. Utilizing a commonly used provision of the JOBS Act, DocuSign submitted its IPO filing behind closed doors and will reveal it weeks before its public debut. Like Dropbox, which is finally going public this week, San Francisco-based DocuSign has been an anticipated IPO for several years now. It’s raised over $500 million since it was founded in 2003 and has been valued at $3 billion. Kleiner Perkins, Bain Capital, Intel Capital, GV (Google Ventures) and Dell are among the many well-known names which have invested in DocuSign. Zoho introduced new service - Zoho Sign – a complete digital signature app for business, that enables to carry out the entire signing process from the cloud and seamlessly close deals in minutes. Zoho Sign integrates readily with other Zoho apps such as Zoho CRM and Writer and works with your daily apps, including Google Drive, Dropbox, Box, and OneDrive, making it easy to sign contracts anywhere and keep your deals moving forward.  This new addition to the Zoho suite is perfect for large enterprises and SMEs and can be used across industries like finance, construction, manufacturing, real estate, and healthcare. PandaDoc, the startup that helps automate creation of quotes, proposals and contracts has announced a $5 million investment. The product is essentially a content layer that sits on top of your CRM tool. Currently it’s compatible with Salesforce.com, Zoho, Pipeliner and Base. It also works with Zendesk to enable customer service personnel to send out renewal contracts and other information. When sales personnel have to create content for their customers, they can choose from a series of pre-defined templates that have been customized for the company. One template might be standard introductory matter, another could be a pricing table with standard discounts. DocuSign is to acquire ARX. The acquisition builds on a three year business partnership between DocuSign and ARX, bringing together ARX's best-in-class CoSign digital signature technology with the world's leading Digital Transaction Management (DTM) platform, to empower customers to transact business with full trust and confidence anywhere in the world. ARX, with its CoSign line of products, offers important compliance certifications critical for customers in Europe, the Americas and Asia, including NIST's FIPS 140-2 Level 3 and Common Criteria EAL4+ certifications. CoSign is used by millions of users globally to transact business in the most highly regulated industries, including life sciences, government and public sector, financial services, healthcare and engineering. The CoSign product line includes native integrations into a wide variety of systems including Microsoft Office, Office 365, SharePoint, Nintex, K2, OpenText, Oracle, Alfresco and more.


2011. Adobe tries to fix its SaaS business with EchoSign acquisition Over the past year, FedEx earned about half a billion dollars on transfering paper documents. It proves that the electronic signature market will continue to grow rapidly. Adobe (aka the giant of the electronic documents space) also understands this. Last week Adobe acquired the most successful electronic signature service - EchoSign. Adobe intends to close its own service eSignatures (which was still in beta) and integrate EchoSign into its SaaS suite Acrobat.com. However, if you look at what Acrobat.com has recently become, this news is likely to be less of a cause for celebration than commiseration with EchoSign’s users and fans. Adobe has acquired EchoSign, a web-based provider of electronic signatures and signature automation, for an undisclosed amount. The company plans to add EchoSign's electronic signature technology to its document exchange services platform, to reduce the time, cost, and complexity associated with having a document signed, the company said. Adobe plans to discontinue as a result of the acquisition a cloud-based electronic signature service, called eSignatures or eSign, that it released in May last year. The service is currently in beta and will be targeted for end-of-life.