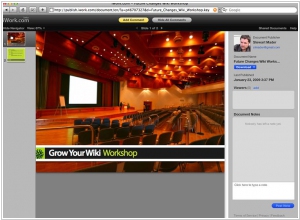 iWork has always been the best way to be productive on the Mac. And iWork for iOS made it easy to create beautiful documents on iPad and iPhone. With iWork for iCloud we’re bringing Pages, Numbers, and Keynote to the web — on Mac and PC. And thanks to iCloud, your work is always up to date on all your devices. It’s easy to work with Microsoft Word, Excel, and PowerPoint files. iWork alternative for PC is Office 365.

Apple rolled out updated versions of its iWork suite, making it free for all customers on both platforms. Many customers already had free copies of these apps, as they came free with new Mac or iOS devices. The pricing change, however, removes the requirement to have bought new Apple hardware to get the apps for free. This expands the apps’ reach to anyone using Apple devices, even if they never bought new or are using older devices. iWork is actually a suite of productivity apps — Numbers, Keynote and Pages — meant to rival Microsoft Office and Google Docs.  Prior to the price change, the Mac versions of the iWork apps were $19.99 and the iOS versions were $9.99 apiece for those customers who hadn’t bought a new device in the past few years.

Apple takes on Google Documents with real-time collaboration on iWork documents. The long-awaited feature makes it easier to cooperate and create documents on the fly. Users can collaborate on images, text and everything else across the iWork suite, including on the mac, iPad, iPhone and on the web. All the iWork apps – Pages, Numbers and Keynote. Aimed at students, professional setting and other collaborative efforts, it’s a long overdue addition to Apple’s productivity suite. The updated apps are expected to ship imminently. From now anyone can sign up for and use Apple’s iWork for iCloud, even if they don’t have a Mac or iOS device. The open access is actually in beta, so to use it, you’ll have to head over to beta.icloud.com. Previously, if you visited the beta site for iCloud, you had to do so from Apple hardware to create a new Apple ID. The key change here is that now you don’t need a Mac, iPhone or iPad to create that ID, which is your golden ticket to the iWork suite of Pages, Numbers and Keynote. Browsing to the iCloud beta site from a Microsoft Windows PC, Linux box, or Google Chromebook, for example, now lets you create your Apple ID, which can be any valid email address. Signing up for the Apple ID from non-Apple hardware will also net you 1GB of free iCloud storage for documents and data. Today Apple has introduced new versions of its tablets iPad Air, iPad Mini and laptops MacBook Air, MacBook Pro. As usually, they all become thinner, faster and even slightly cheaper. But there are two more interesting news that were announced at the presentation. First - is that Apple's office suite iWork adds real time collaboration feature. It works via iWork for iCloud, so it allows even interaction between Apple computer and PC. Of course, meanwhile iWork (and in particular its collaboration tools) - are far behind MS Office and Google Docs, but for Apple users it's still a useful thing. Another interesting news - is that Apples's software (including iWork and operating system OS X Mavericks) is now available for free. All Mac OS users can get the latest version of the operating system for free, and if you buy iPhone, iPad or Mac - you get the free iWork. Of course, this can be called innovation, but from the other side - Apple can always include the cost of its software to the price of the hardware. Apple's office suite iWork has been available on the iPad tablet since its launch last year, but the iPhone owners still had to look for third-party applications to work with their office documents (the most popular office suites for iPhone are Quickoffice and Office²). And in less than two years Apple has adapted its mobile iWork to iPhone's small screen. Traditionally, iWork includes the word processor Pages, the spreadsheets tool Numbers and the presentations app KeyNote. As usual Apple is not trying to expand to the "other" world and compete globally with MS Office and Google Docs. Instead, Apple is trying again to make more money on it's fan-base: each of the 3 mobile iWork apps costs $9.99. In addition, the mobile iWork will only work on the latest models iPhone 3GS and iPhone 4 (i.e. Apple encourages users to buy the new models). Also, for now the iWork for iPhone can't work with the online office service iWork.com, but it is expected that this feature will be added in a couple of weeks. Today Steve Jobs introduced iPad - the device that he called the most important thing in his life. And from our side it would be wrong to ignore this event, especially taking into account, that the previous thing (iPhone) now has the significant impact on the mobile business-apps market. While we must admit that iPad - is a very convenient thing for home use and it will make a revolution in e-publishing, but we do not believe that iPad (or other device of such clipboard design) will replace communicators and netbooks from the enterprise environment. We were able to come up with only 5 reasons that can make this $500 device useful for your business: