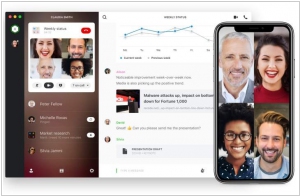 The best alternatives to Wire are: Signal, Telegram, Slack, Skype Wire, the end-to-end encrypted messaging app and service, has raised a $21M. While Wire started as a consumer app, it never managed to attract hundreds of millions of customers like other messaging apps. So now the company focuses on large customers, such as big corporations and government customers with a ton of potential users. Five G7 governments are currently using Wire. Right now, Wire has 1,800 customers. In addition to working on Messaging Layer Security (MLS), Wire has been focused on improving conference calls and real-time interactions. The company believes messaging apps and real-time collaboration apps are slowly converging. And the startup wants to offer a service that works well across various scenarios. Wire, an enterprise-focused end-to-end encrypted messaging service, has quietly raised $8.2 million. Besides, it moved its holding company to the US from Luxembourg and is planning to introduce a freemium tier to its existing consumer service — which itself has half a million users — while working on a larger round of funding to fuel more growth of its enterprise business — a key reason for moving to the US. For now Wire is keeping the rest of its operations as is. Customers are licensed and serviced from Wire Switzerland; the software development team is in Berlin, Germany; and hosting remains in Europe.