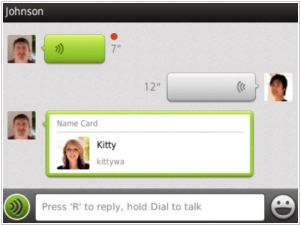 WeChat is a free messaging & video calling app that allows you to easily connect with family & friends across countries. It's the all-in-one communications app for free Chinese messenger WeChat launched its free office chat app, WeChat Enterprise.For now it's only available in Chinese via apps for iOS, Android, Windows, and OS X. WeChat Enterprise includes a number of features that are familiar territory to those who have used business chat apps. But it also has some welcome innovations. The service can essentially replace group email, and make quick chats between colleagues easier. It has useful add-ons like the ability for an employee to mark when they are on a break, hold group voice/text chats, and allows for companies to build in specific features like automated forms for reimbursements, vacations, and the like.

Popular messaging app WeChat, which is owned by Chinese Internet giant Tencent, is taking on Skype by launching an international telephone calling service. The service is initially available for users based in the U.S., Hong Kong and India, but it will roll out to others over time. ‘WeChat Out’ is different from the existing calling options inside WeChat (voice and video) because it allows for calls to actual phone numbers (mobile and landline) rather than just to fellow WeChat users. WeChat is gifting its users an initial $0.99 in credit (which it says will allow up to 100 minutes in calls) to get things started, although it hasn’t revealed the cost of calls once that freebie has been eaten up.