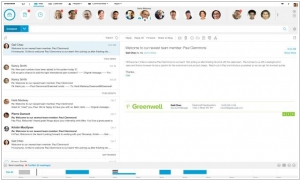 HLC Verse (former IBM Verse) helps you prioritize information, people and tasks, anticipating what you need, when you need it. Verse also integrates collaboration capabilities like instant messaging, file sharing and connections to social networks, from your desktop or virtually any mobile device. Following in the footsteps of Google Inbox and Microsoft Clutter, IBM wants to reinvent email, too. The company has announced IBM Verse - a "social mail" system for businesses that aims to help employees spend less time curating their inboxes. The system takes into account calendars, contacts, file sharing, social updates and other factors to help highlight the most important messages and give greater insights about the people exchanging them. It can learn over time and eventually predict which messages an employee should prioritize. On any email thread, a user can click through to see a visual tree of all the people connected, how they're connected to each other, and their positions in the organization. Again, the system learns over time, so if it thinks someone is being left out, it will suggest new people to add. IBM Verse is launching as a beta this month, with a full rollout with mobile apps — expected in early 2015. When early this year IBM released their new SaaS platform, LotusLive, they promised to add Email to its suite. Today this promise is realized: the brand new SaaS email service LotusLive iNotes is available for business-users. IBM pushes it as a new alternative to Google Apps. Why Google Apps, but not GMail? Because, except the email tools, iNotes contains calendar and contact manager. IBM reps say that Google can't understand the difference between consumer web-services and business apps, and IBM has a vast experience in creating and supporting complex enterprise systems. So, it's just a question of time, when iNotes will drive away Google Apps users, moreover it costs only $36/user/year against Google's $50.