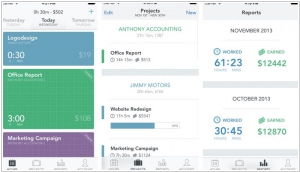 The best alternatives to Timely are: Harvest, ManicTime, Toggl Memory.ai, which is building AI-based productivity tools to help you with your own time management, has raised $14 million. The startup, based out of Oslo, Norway, initially made its name with an app called Timely, a tool for people to track time spent doing different tasks. Aimed not just at people who are quantified self geeks, but those who need to track time for practical reasons, such as consultants or others who work on the concept of billable hours. Timely has racked up 500,000 users since 2014, including more than 5,000 paying businesses in 160 countries. The startup’s big technical breakthrough with Timely was to figure out an efficient way of tracking time for different tasks, not just time worked on anything, without people having to go through a lot of data entry.

Timely is a time-tracking app that doesn't focuse on specific tasks or projects, but on more high-level view of your work week. You estimate how long you’ll take to work on a project on an upcoming day and use that to decide how much more work to take on or meetings to have. Timely is available on iOS and the web, and today it's releasing a new feature that lets you import meetings and events from your calendar so that you don’t have to enter the same information across multiple apps. Timely is free to use as an individual, but you’re limited on the number of projects you can manage at once. It makes the most sense to use Timely as a team or company on one of its paid plans, which start at $49 per month for a team of five.