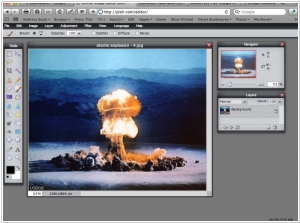 The most robust browser photo editor, for all your editing needs. Online or offline. Browser-based or native app. Now for Windows and Mac as well as iOS and Android. Pixlr is ready to make moments beautiful wherever you are and whenever inspiration strikes. While Adobe is fighting with Apple and trying to sort out its SaaS-collaboration strategy, it can loose another niche which brings it the considerable part of income - the graphical design software. One of the main contenders - is Autodesk. Last week Autodesk, the maker of engineering design software acquired the online Photoshop alternative - service Pixlr. Recently, we have put together the 5 best online image editing tools and Pixlr was recognized as the best of them. In addition, Autodesk is quite straightforward in its cloud strategy. Last year it launched the SaaS-version of its flagship product AutoCAD WS. Some people might say that for the design software cloud technologies - are unnecessary, because they require first of all the speed and the rich interface of the desktop apps. But remember, the same thing people where saying about the cloud document editors. Like with the online document editors, the main advantage of online graphical editors - is collaborative features. For example, a designer needs to reconcile a template with a client, and an engineer needs to collaborate with the chief designer on a scheme. In such cases, the real-time collaborative editing is much more effective than sending file via email back-and-forth. In addition, the online image editors let you work on single file in office, at home or on the road, store the version history, view and edit files from mobile devices. They don't require powerful hardware and potentially much cheaper than desktop graphical suites. In particular, AutoCAD WS provides these advantages. And probably Pixlr also will. But Adobe is not getting ready for these new rules of the game. As you know, Adobe launched its online version of Photoshop - Photoshop Express in 2008, but it's just a beautiful toy that doesn't grow. Its editing capabilities are comparable to Google's Picasa and it provides no collaborative tools.