Notability is #6 in Top 11 Notebooks 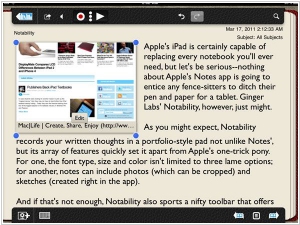 Your best ideas often happen while you’re out exploring the world. With Notability and iCloud, your office travels with you. All of your notes, sketches, plans, and forms are available to mark up, review, or send to a client anytime, anywhere. Evernote competitor, Notability, which was already available for the iPhone and iPad, is now bringing all the same functionality to the Mac desktop, rounding out all the places where its users might want to access their notes. Notability is knows for its support of wide range of inputs. Users can draw on the mobile and tablet apps, add images and text, and even import and embed documents or web pages directly into their documents, all with audio timestamped against the text or media added. Now that it’s moving to the Mac App Store, Notability will become even more useful. Using iCloud, users will be able to sync and update documents with little hassle and access them on all their Apple devices. The desktop version of the app will cost $9.99 to download, which is above the usual $4.99 price for Notability.