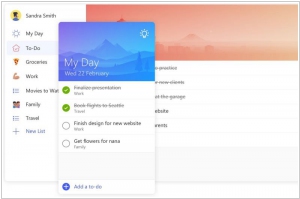 Managing your to-dos and lists can sometimes take as much effort as completing them. To-Do helps you focus and plan your day from the moment you open the app. To-Do is built on Office 365. Integration with Outlook makes it easy to stay on top of your Outlook Tasks from anywhere.