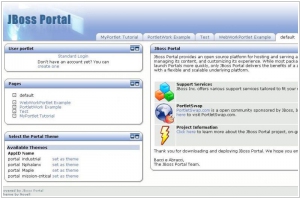 JBoss Enterprise Portal Platform meets the demands of internal and external end users who require access to, and interaction between, back-end applications, SOA services, and Web 2.0 applications. Based on an open, reliable framework, JBoss Enterprise Portal Platform meets the development and operational demands of the smallest tactical mashup style application, as well as the largest mission-critical web sites.

2006. Why IBM passed on JBoss acquisition

IBM considered acquiring open-source Java middleware company JBoss, but chose to go a different route for the both financial and technical reasons. Now Oracle and JBoss are rumored to be in negotiations over a JBoss acquisition. The price tag for such a deal is reported to be between $200 and $400 million. Like Oracle, IBM has a closed-source line of Java middleware called WebSphere. In May last year, IBM purchased Gluecode, a small company with less than 15 employees which was building a support business around the Apache Geronimo project, an open-source Java application server.  The roots of Gluecode are at JBoss. A small group of developers left their employment at JBoss in 2003 to start the Apache Geronimo project. Apache Geronimo was certified to meet the Java 2 Enterprise Edition standard in October last year. IBM has rebranded Gluecode as WebSphere Community Edition. It sells support services around the software primarily to smaller businesses.

Open-source company JBoss is looking to expand into integration and business process automation software, potentially through acquisitions, a company executive said Friday. The company is evaluating a plan to purchase an existing infrastructure software, or middleware, company and make its product available for free under an open-source license. Other expansion options include taking over an existing open-source project or writing its own integration and process automation software. The company could use some of the $10 million it gained from venture capital investors to finance acquisitions. JBoss makes money by offering services and training for a handful of freely available infrastructure software products, notably its JBoss Java application server, which is used to run business applications written in Java.