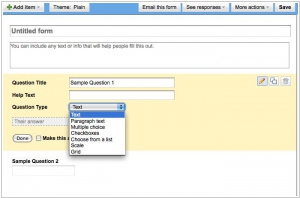 Create a form and collect the responses in a Google Docs spreadsheet. To get started view all templates or click on one of the categories below. It's free Google unveiled update to its service for building online surveys Google Forms. Among the new features is an intelligent response validation that will automatically suggest the right kind of response validation for your various fields. If you are asking for an email address, for example, Forms will suggest to choose the aptly named “Accept emails only” option. The same goes for URLs, age and similar fields. Forms users will now also be able to solicit file uploads from users outside of their company — but only if both your company and your respondent’s company allow cross-domain file sharing in Google Drive. Google also is introducing a new question type: the checkbox grid. This allows respondents to pick from multiple options in a table. Also new in Forms are settings which you can apply to all of your new forms. With this, you can choose to always collect email addresses, for example. Users can now also reorder their sections with just a few clicks.

Online form and survey creation tool Google Forms gets add-ons for Forms - new tools, created by developer partners, that deliver even more features to your surveys (just like add-ons for Docs and Sheets). Add-ons bring handy extras to your survey building experience, like setting a survey end date, sending custom emails based on responses, storing lists of choices that you frequently add to questions, and more. For example add-on formLimiter allows to close your survey automatically, after a maximum number of responses is reached, or at a date and time of your choosing. And add-on Ultradox Trigger allows to create custom emails, reports, invoices, newsletters, etc., based on information that people enter into your form. Google Forms, the service for creating online forms and surveys, is finally getting a professional makeover thanks to the addition of themes. From now users can select professionally designed custom themes with images reflecting a variety of social activities (like sailing, biking, camping, and more, or choose from more generic images like party banners, cars, books...) and further edit them by selecting their own fonts and colors, choosing a background, as well as uploading their own photos. There are also simple themes with just a white background and colorful fonts for those forms that don’t need a banner image but could still benefit from a better-designed look-and-feel.