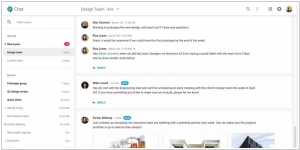 A messaging platform built for teams. Whether in a 1:1 chat or a dedicated group workspace, Hangouts Chat makes it easy to collaborate with your team in an organized way. Share and discuss Docs, Sheets, and Slides all in one place. Google has officially removed the Hangouts brand from its enterprise G Suite offering with the rebranding of Hangouts Chat as Google Chat and Hangouts Meet as Google Meet. As for the Hangouts brand, it will continue to live on as the name of the consumer chat app that Google spun out of its shutdown social network Google+ back in 2013 as a spiritual successor to Gchat. Hangouts Chat, Google’s business-focused Slack competitor, is getting emoji reactions. That’s a feature that Slack has long had, so if anything, today’s move makes Hangouts Chat even more Slack-like than before. The new feature works just like you’d expect and just like in Slack; this update allows you to now quickly add a thumbs-up emoji to all those comments in Hangouts Slack Chat that you couldn’t care less about but where internal politics dictate that you should say something. You could also use them for a quick internal poll or to acknowledge a request where typing “yes” would’ve felt like too much work.