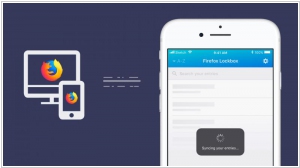 Firefox Lockwise is a password manager from Mozilla, the makers of Firefox. It’s an app for iPhone and Android that gives you access to passwords you’ve saved to Firefox. Mozilla’s new free password manager Lockbox is designed for Firefox users that want to use other browsers on iPhone and Android. Firefox Lockbox mobile app offers a simple if a bit basic way for users to access from their mobile device their logins already stored in their Firefox browser. The app is nowhere near as developed as password managers like 1Password, Dashlane, LastPass and others as it lacks common features like the ability to add, edit or delete passwords; suggest complex passwords; or alert you to potentially compromised passwords resulting from data breaches, among other things. However, the app is free — and if you’re already using Firefox’s browser, it’s at the very least a more secure alternative to writing down your passwords in an unprotected notepad app, for example. And you can opt to enable Lockbox as an Autofill service.***