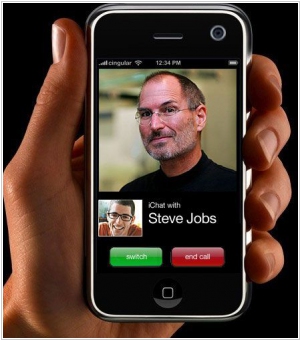 FaceTime is a video calling software application and related protocol developed by Apple for supported mobile devices running the iOS, in addition to Macintosh computers running Mac OS X 10.6.6 and higher. FaceTime is supported on any iOS device with a forward-facing camera.

2015. iMessage and FaceTime get two-factor authentication Apple has improved the security of FaceTime and iMessage, its voice/video and multimedia chat communication tools. The services received two-factor authentication as an option for users to enable, meaning that even if someone uses their Apple ID email and password to enable iMessage or FaceTime on a new device, they’ll still need to use a PIN from an existing trusted device to gain access to those services. If you’ve previously enabled two-factor for iCloud, it’ll also be enabled to FaceTime and iMessage. The additional level of protection applied to these services helps ensure that people will have a harder time grabbing potentially private images from your iMessage history, or pretending to be you via online communication methods.

Fring was the first video chat application on the iPhone. However, without frontal camera, it was not very helpful. But together with the front camera on iPhone, Apple introduced  it's own video chat program Facetime, that supported two-way video calls and immediately replaced Fring. Now Fring strikes back. Today, the strartup has launched the new iPhone app, which also supports two-way video calls, and in addition, has two major advantages over Facetime. First, it works via 3G (and Facetime - only via Wi-Fi), and second, it allows iPhone users to communicate with those who use Android and Nokia S40 smartphones, that run Fring (and Facetime supports video calls only between iPhones). However, the benefits of Facetime - are simplicity and iPhone native integration (to start a video call - you don't need to launch third-party program), and higher video quality.


2010. It's official: Mobile Video Calls is the next big thing: Skype vs Facetime A couple of weeks ago we suggested that Google is going to shift the video communications market (and win Skype), betting on mobile video calls. Today we can accurately say that very soon mobile video chat will become a huge market and the IT giants will fight for it. It's enough to watch the Facetime (iPhone 4 video chat) presentation to understand this. Since June 24 Apple will start selling iPhone 4 with the front camera and video over Wi-Fi in US, and it's obvious that to the and of this year millions of users will make video calls via the iPhone, and Apple will become the world's largest mobile video chat provider. But it will be only the short term win. Then Skype, Google and other players will join the fight.