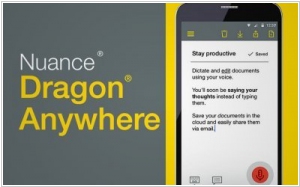 Save your organization time and money with Dragon Professional Anywhere, AI-powered speech recognition that integrates into enterprise workflows. Nuance Communications announced Dragon Anywhere, the dictation tool which will be available later this year, at long last brings the company's desktop-level dictation capabilities to iOS and Android. Dragon Anywhere is a note-taking app that allows users to create and edit documents with only their voices. Of course, iOS, Android and even Windows Phones already have free speech-to-text capabilities baked into their mobile operating systems, but Dragon Anywhere goes further than those offered by default. The app is able to transcribe notes continuously as you speak without any time limits. Siri, by comparison, often requires you to pause about every 30 seconds while the text catches up with your words. The app also offers far more voice editing tools so you can actually format and change documents with voice commands.