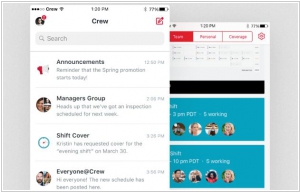 Crew is a communications app that keeps everyone on the same page for everything work-related.

The best alternative to Crew is Slack