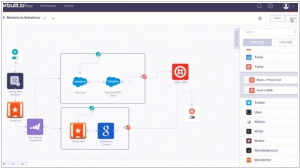 The best alternative to Built.io is MuleSoft Built.io is launching a major update of its enterprise integration service Flow that will make it easier for businesses to build more powerful integrations. Flow is a drag-and-drop tool for building enterprise integrations. It’s a bit of a mix of Yahoo Pipes (R.I.P.) and IFTTT for connecting services like Salesforce and Marketo to help automate the sales process in an organization, for example.  It’s worth noting that in the world of enterprise, integration is still a big business, with plenty of development shops doing very little else but helping their customers connect various third-party services. The Built.io team argues that it can take a process that often takes weeks and reduce it to a few hours.