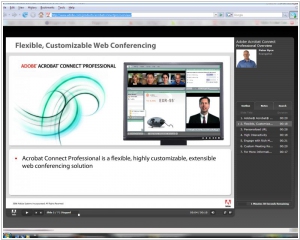 Adobe Connect is an enterprise web conferencing solution for online meetings, eLearning, and webinars used by leading corporations and government agencies. And it's based on Adobe Flash technology, so you can deliver rich interactions that participants can join easily.