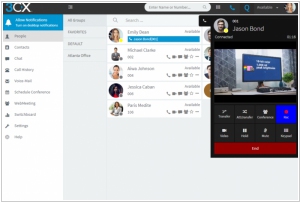 3CX Phone System for Windows is a software-based IP PBX that replaces a proprietary hardware PBX / PABX. 3CX’s IP PBX has been developed specifically for Microsoft Windows and is based on the SIP standard, making it easier to manage and allowing you to use any SIP phone (software or hardware). 3CX, the developer of popular Windows VoIP PBX 3CX Phone System, announces the acquisition of Italian video conferencing developer e-works.  In October 2013 3CX partnered with e-works to use its engine for the own videoconferencing solution 3CX WebMeeting. And now they decided to completely buyout this engine. "The acquisition and much anticipated launch of 3CX WebMeeting will significantly extend our lead in the Unified Communications market. With e-works’ cutting-edge technology we will also capitalise on the growth of WebRTC" said Nick Galea, CEO of 3CX.