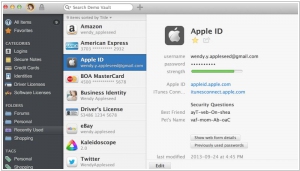 1Password gives you the security you need in today's online world without slowing you down. 1Password makes you more productive while simultaneously increasing your security with strong, unique passwords for all your accounts and keeps all of your important information encrypted and secure.

1Password, the password management service that competes with the likes of LastPass and BitWarden, has announced a major push beyond the basics of password management and into the infrastructure secrets management space. To do so, the company has acquired secrets management service SecretHub and is now launching its new 1Password Secrets Automation service. With the combination of 1Password and its new Secrets Automation service, businesses can use a single tool that covers them, from managing their employee’s passwords to handling infrastructure secrets. Fourteen years after launching 1Password takes a $200M Series A. Dave Teare says he and his co-founder Roustem Karimov stumbled onto the idea of 1Password in 2005. They were running a web development consultancy when they decided to resolve a long-standing problem of logging into multiple websites, a particularly acute issue given their day jobs. They decided to build a tool to help, and when they put it out in the world, they found lots of other people had the same problem. They ended up closing the web consultancy to build 1Password, and the rest, as they say, is history.

Popular password manager 1Password has a new subscription product aimed at business users with larger teams. The new offering, 1Password Business, replaces the Teams Pro plan. It is priced at $7.99 per user, per month, which includes a free 1Password Families membership for each user — to extend workplace security hygiene to employees’ home computing environments too. While the remaining $3.99 Teams product is geared towards smaller businesses or group users, the new Business plan offers enhanced customer support; more per person document storage; and a larger number of guest accounts. A little over a month since 1Password incorporated a pwned password check feature, the password manager service has now netted what’s being described as “a partnership” with the popular breach monitoring service Have I Been Pwned. HIBP is now recommending users sign up to 1Password’s service at the point when they learn their information may have been involved in a data breach. It’s a major win for 1Password of course, whose brand will now be in front of people at the point when they are likely to be most motivated to pay to tighten the security screw. Password management service 1Password adds a neat new feature that lets users check whether a password they’re thinking of using has already been breached. At which point it will suggest they pick another. This is in addition to the more usual password strength indicator bar that tries to encourage web users to improve their security practices. The pwnage check builds on that by further reducing the risk of password reuse because it’s verifying if the specific password has appeared in a number of known data breaches. Popular password manager 1Password is trying a new distribution model. Instead paying for the 1Password app on your Mac or PC (for $64.99) and paying again to upgrade to a new major version, AgileBits now has a new plan — for $2.99 per month, you can download and use all the 1Password apps for as long as you subscribe. This comes in addition to the existing model. People who sign up to a subscription now get six months free. AgileBits tells me it will continue to provide both models with the next major update. But after Adobe, Microsoft and countless of other software companies, it looks like subscriptions are here to stay as many people now opt for subscriptions instead of one-time purchases. AgileBits released significant update to the 1Password for Android, which most notably brings support for fingerprint scanners - something it has already supported on Apple devices. The convenience of Fingerprint Unlock is only for devices that both run Android Marshmallow (version 6.0) and include a fingerprint scanner (of course), such as the Google Nexus 5X. Those other features include support for teams, plus a redesign that adopts Google’s Material Design and includes a convenient floating button and omnipresent toolbar.