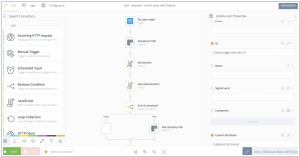 Tray.io is the most advanced integration platform for connecting the tools you use every day. Easily streamline processes using our visual workflow editor.
18
Zapier 2017 - Zapier added shared folders for teams to take on Cloudwork

Cloud app integration service Zapier is unveiling shared folders to help teams automate anything, together. Shared folders let teammates access a shared set of Zaps and collaborate to build more powerful workflows. With your individual Zapier account, you can create automated workflows called Zaps that connect two or more apps. But until now, you couldn't share those clever workflows with your co-workers. Shared folders make it possible. Anyone with access to a shared folder can tweak and improve the Zaps inside or copy them for their own use. We even added an option to share accounts for other tools—like Dropbox, Pipedrive, and Typeform—so you don't need to create separate logins for everyone. The conclusion is that Zapier gets more collaborative in comparison to Cloudwork