Tableau complements your natural ability to understand data visually. Our breakthrough products let you create rich analyses and share your insights with colleagues in seconds. Connect and visualize your data in minutes. Tableau is 10 to 100x faster than existing solutions. From spreadsheets to databases to Hadoop to cloud services, explore any data with Tableau.
4
Zoho Analytics 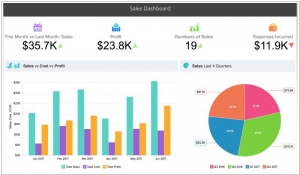 Zoho Analytics (previously, Zoho Reports) is a self-service BI and data analytics software that lets you create visually appealing data visualizations and insightful dashboards in minutes.
Tableau vs Zoho Analytics in our news:
2021. Zoho Analytics 5.0 uses AI and ML to assist you in getting insights from your data Zoho unveiled a new version of its self-service BI & analytics platform Zoho Analytics. It now includes Zoho DataPrep - an augmented data preparation and management service, available on the cloud, Zoho Analytics Embedded BI - offering ISVs and developers to integrate Zoho Analytics seamlessly into their product/solution offering and Zoho Analytics Marketplace, which allows partners and third-party vendors to build analytics apps on top of Zoho Analytics and market in Zoho Marketplace. Also included are Zoho Analytics Native Apps, apps built by us and natively embedded within third-party apps, and available in their marketplaces. With inbuilt AI assistant Zia, there’s no need to learn complex SQL querying. You can hold colloquial conversations with Zia, and get the answers you need as relevant reports.

Zoho Analytics now sports the AI-powered Zia, Zoho’s intelligent assistant. Whether it be questions like ‘Get me the support tickets received this month, by product by region’ or ‘Give me sales by country by channel’, you just ask Zia. Zia converts such questions asked in natural language to complex SQL queries in the back end, and comes up with multiple relevant report suggestions. You can save the suggestion that best suits you as a report directly. Besides, the new Zoho Analytics makes it easier to analyze data from across apps, and to easily create interactive reports and dashboards and predicts future trends accurately based on their past data. Also Zoho Analytics adds seven new connectors for popular business apps. Each of these connectors come with more than 100 pre-built domain-specific reports and KPI dashboards that users can benefit from right away.