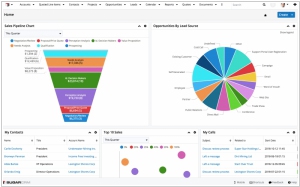 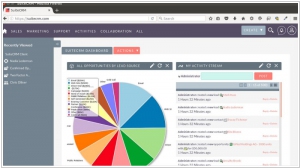 SuiteCRM is SugarCRM supercharged. It is a free and open source alternative to SugarCRM Professional Edition.
SugarCRM vs SuiteCRM in our news:
2020. SugarCRM acquires Node to gain predictive customer intelligence SugarCRM announced this morning it has acquired customer intelligence startup, Node. While Sugar gains a ton of AI expertise, it also adds a customer prediction element to the platform, such as figuring out the customers most likely to convert or most likely to leave. This puts it in more direct competition with Adobe and Salesforce, which for some time have had intelligence layers that provide that kind of predictability. Node was founded in 2014 and has raised over $43 million. It fills a gap for SugarCRM adding engagement analytics and action at both ends of the business, and at the same time provides a market differentiator for them. SugarCRM announced a joint offering with IBM Cloud to increase the security and control on its customer relationship management platform. The IBM integration gives Sugar’s platform the ability to deploy on IBM’s dedicated, private bare metal clouds, which SugarCRM claims will improve the overall security and performance. IBM comprises a global network of 46 cloud data centers, giving Sugar users access to a bigger and faster network. IBM and SugarCRM have had an ongoing relationship. Last September, they announced IBM Marketing Cloud for SugarCRM, which integrated marketing and sales operations around customer experience.

New version SugarCRM 7.7 is enhancing search and adding new capabilities in the latest version of its customer relationship management (CRM) software platform.  The new custom tags allow CRM users to tag any record in the application. Sugar tags are integrated into the Sugar database. The benefit, according to SugarCRM officials, is that tags become available through a global search experience instead of a separate tag search mechanism. SugarCRM also provides a "knowledge base" where users can write articles about any topic and make them available internally or externally. The base includes an intelligence panel where context-sensitive display enables agents and customers to find articles. While the main competitors (Salesforce and Microsoft) entertain each other with the lawsuits, SugarCRM gradually strengthens its market position. Yesterday the company officially announced the release of SugarCRM 6. The major changes have affected the interface - it became much easier, more convenient and flexible. Users will be able to leave on screen only these elements that are used. The new convenient contextual search panel lets you view search results without leaving the current page, and the new recent pages panel makes navigation easier. It's interesting that the new interface is available only in payed (Professional and Enterprise) editions, but not in the free Community Edition. Because of this the company received another portion of critics, because it actively uses the "open-source" term for SugarCRM promotion. SugarCRM, an open-source Salesforce alternative, is trying to keep up with its rival. The newest version SugarCRM 5.5 is focused on the same areas as latest Salesforce versions: platform, social tools and mobile access. Of course, the most significant upgrade is the new integration platform Sugar Cloud Connectors, that allows to link SugarCRM to third-party business applications using Web services. As an example, the company introduced the LinkedIn connector, that allows to display LinkedIn-profile data on contact page inside SugarCRM. The new activity streams module Social Feeds is very similar to the recently unveiled Salesforce Chatter. In addition to short message exchange and status updates, it allows you to receive notifications about various actions in the system, such as invoice creation or customer data change.

Open-source software start-up SugarCRM plans to introduce support services for its free contact management product on Thursday, part of a big push to lure customers away from high-priced, proprietary programs. To make money, the tiny, 10-person company is launching a set of support services for $149 per user per year. With a business model not unlike that of Linux distributor Red Hat, SugarCRM will continue to offer its software for free while collecting fees for installation services, training, warrantees, technical support and software patches. The company plans to introduce hosting services in October. Along with the launch of its services package, SugarCRM is introducing some software features, including a tool for importing data from rivals' programs and hooks into Microsoft's Outlook e-mail program.