Stripe builds the most powerful and flexible tools for internet commerce. Whether you’re creating a subscription service, an on-demand marketplace, an e-commerce store, or a crowdfunding platform, Stripe’s meticulously designed APIs and unmatched functionality help you create the best possible product for your users.
6
WePay 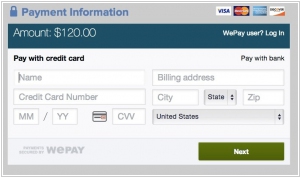 WePay is an online payment service provider in the United States. WePay's payment API focuses exclusively on platform businesses such as crowdfunding sites, marketplaces and small business software. Powered by JP Morgan Chase
Stripe vs WePay in our news: