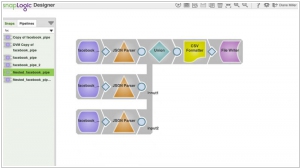 Social, Mobile, Analytics, Cloud Computing and The Internet of Things. If you’re feeling SMACT, it’s time to get Snapped. SnapLogic delivers a powerful, yet easy to use Elastic Integration platform for “citizen integrators” to connect all sources, sizes and types of data at cloud speed.
15
Workato

A single platform that automates work and powers innovation across your business. Better Integrations Through Intelligent Automation
SnapLogic vs Workato in our news:
2018. Workato raises $25M for its integration platform