Skype is a software application that allows users to make voice and video calls and chats over the Internet. Calls to other users within the Skype service are free, while calls to both traditional landline telephones and mobile phones can be made for a fee using a debit-based user account system. Skype has also become popular for its additional features which include instant messaging, file transfer, and videoconferencing. Skype alternative for enterprise is called Skype for Business.
4
Zoho Meeting 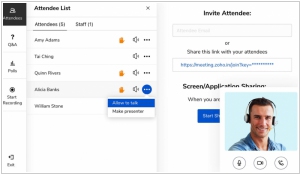 Zoho has presented a new and interactive interface for its video conferencing service Zoho Meeting. The online meeting interface of Zoho Meeting now has a fresh look with the main menu placed at the top for easy access to essential features. The active speaker in a meeting can now be identified by the blue frame around their video feed and a microphone icon at the bottom left corner. The new interface lets you conduct meetings with up to 100 participants and view 25 active video feeds at a time. Share your screen with others in a meeting to deliver a presentation or to show a document during your meeting. Share your entire screen or just a select app window. If needed, others can request remote access to your screen and collaborate on the document or presentation. Zoho Meeting adds new features for webinars. Participants in a meeting can now share screens whenever they want (after presenter’s approval). Registration moderation lets you filter webinar registrants and allow only the leads you choose to attend your webinar. Identifying the right leads for your webinar starts with your registration form. Besides you can now watch webinar and meeting recordings in HD quality, share them with your leads and colleagues, and download them for offline viewing. With paid subscriptions to Zoho Meeting, you can store 10 meeting recordings and 25 webinar recordings (per user) on the cloud. Online meetings software Zoho Meeting is introducing Moderator Controls. Now presenter can lock meetings to minimize interruptions when a useful discussion is underway. Once locked, no one can join. Also you can give anyone a chance to share their screen and illustrate their point using the Switch presenter feature. Participants can share documents, presentations, spreadsheets, or any other application, via screen sharing. Mute individuals or all participants to cancel background noise that might be interfering with your session. If someone inadvertantly joins or is no longer connected to the topic of discussion, just remove them and move on.