Skype is a software application that allows users to make voice and video calls and chats over the Internet. Calls to other users within the Skype service are free, while calls to both traditional landline telephones and mobile phones can be made for a fee using a debit-based user account system. Skype has also become popular for its additional features which include instant messaging, file transfer, and videoconferencing. Skype alternative for enterprise is called Skype for Business.
2
Zangi 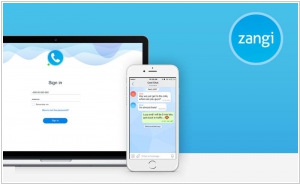 Zangi provides a messenger platform on top of which you can build your business solution. The variety of features are added to Zangi platform to build any type of communication and collaboration solution. High-quality features are provided to build secure, private and independent messaging apps in a short period of time.
Skype vs Zangi in our news:
2020. Skype has a Zoom-like video call function called 'Meet Now'