Skype for Business vs WebEx

Get messaging, audio and video calls, online meetings, and sharing all in one app. Meet with up to 250 people – even if they’re not on Skype for Business. All they need is a phone or Internet connection. See contacts’ online statuses, schedule meetings, and start conversations from Office apps.
32
WebEx 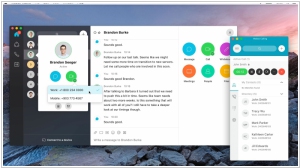 Cisco Webex is your one place to call, message, meet. Build stronger relationships with face-to-face meetings and real-time collaboration using whiteboarding, screen sharing and more. Showcase the best you with video conferencing that is simple but powerful.
Skype for Business vs WebEx in our news:
2021. Cisco to acquire startup Socio to bring hybrid events to Webex Cisco has agreed to acquire startup Accompany, which uses artificial intelligence to build databases of people and relationships at companies. It's like a personal assistant, giving executives the context they need before conversations and meetings. Cisco plans to incorporate Accompany technology into its collaboration products, for example by introducing company and individual profiles into Webex meetings. Cisco says it will pay $270 million in cash and stock in the deal.

Cisco announced that it will buy video conferencing service Acano for $700 million. Cisco already offers that same kind of service - WebEx (that it acquired in 2007 for $3.2 billion). In addition, they launched a more modern alternative to WebEx they called Project Squared, last year. But Acano is offering much more sophisticated than what Cisco has been providing and really fills out its video portfolio. Acano will enhance the company’s ability to make connections in a heterogeneous environment. In other words, it helps make video conferencing work, even when there are multiple vendor tools involved — and across multiple devices from mobile to a big screen in the board room. “Acano’s portfolio includes video and audio bridging technology and gateways to enable customers to connect different collaboration solutions from disparate vendors across cloud and hybrid environments.