SAP’s intelligent ERP solutions are the Digital Core that enable businesses to integrate end-to-end cross functional next generation business processes so that companies can become intelligent. SAP's cloud ERP solutions use intelligent technologies to help you grow, innovate, and optimize time and resources – no matter the size of your business.
14
SuccessFactors 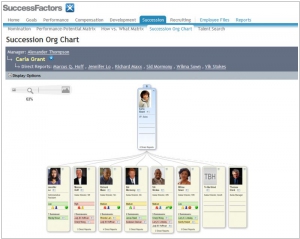 SAP SuccessFactors’ time-tested, analyst-recommended solutions drive goal execution across your business from top-to-bottom like no other alternative. By focusing on the three pillars of Business Execution excellence—Business Alignment, Team Execution and People Performance—SuccessFactors Business Execution Software delivers real business impact. It provides the foundation for organizational success by giving you the tools to put the right people in the right place to work on the right things.
SAP ERP vs SuccessFactors in our news:
2021. SAP is buying Berlin business process automation startup Signavio Everyone knows that "talent is everything". Everyone knows that 80% of his time boss should  devote to employees and their motivation. But in practice, boss remember about an employee only when he did something wrong and proved once again that his salary is too high. However, as competition in all areas is growing and business becomes more and more dependent of its talents, this outdated practice will only lead to deadpool. That's why talent management software and services are now experiencing a rapid growth. In the recent SaaS tool ratings talent management (and related technologies - HRM and e-Recruting) - are among most demanded. In this talent management market two gorillas have emerged: Taleo and SuccessFactors. And both these companies provide SaaS solutions.